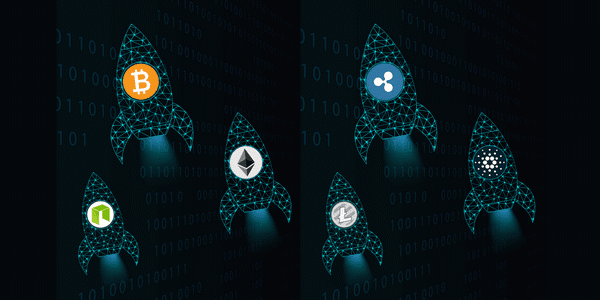 As at the time of writing this piece, Bitcoin and the entire crypto market as a whole has been experiencing a retrace from its 2020 highs. There have been significant changes since our last piece on developments in the sector. Bitcoin is currently trading around $7800 and ETH below $200 at $ 198. Just before the retrace, the crypto market had seen some decent gains in January. Given the upcoming Bitcoin Halving, the overall market sentiment still looks bullish. Let’s discuss how this will affect cryptocurrency development trends.

Most blockchain project teams have seized the opportunity of this important upcoming event (bitcoin halving) to speed up platform developments and major project updates. This is necessary to leverage the bullish opportunity that the Bitcoin halving brings to the entire crypto space.

Unarguably the quality of technological development backing a project has a strong correlation with the value of its token or coin. This article takes a close look at some selected top 20 altcoins concerning their ongoing tech development.

Just as Bitcoin is the first Cryptocurrency, Ethereum reserved the first place among the first issued smart contract platform in the history of cryptocurrencies. As the biggest DApp platform among the likes of EOS and Tron, Ethereum has found a wide reach of applications in banking and financial contracts, escrows, ICO fundraising, identity management, etc.

With a block time of 10 to 20 seconds, the ETH network attempts to solve some of the bottlenecks associated with the Bitcoin network which takes approximately 10 minutes for a transaction to be registered in a block.

Given the much anticipated Ethereum 2.0, a lot of upgrades have preceded this major upgrade: The Casper FFG update, Constantinople/St. Petersburg upgrade, The Istanbul hard fork, and the Muir Glacier upgrades. The community believes that the ETH2.0 will have the capabilities of leading the future of a scalable blockchain financial product.

The founder of the Ethereum blockchain talks hard about the upcoming ETH2.0 upgrade and how it could solve the most inherent challenges being faced by the network. The ETH2.0 is scheduled to release in 2020.

Ripple is the leading blockchain project for cross border settlement and the second-largest altcoin by market capitalization. The Ripple blockchain and payment network was launched in 2012 with the mission of facilitating and end-end cross-border payment at a significantly low fee in the most transparent way ever possible.

The ripple network does not require mining for transactions to be processed and ultimately boasts of a transaction speed of 5 seconds. By this, it reduces the usage of computing power and minimizes network latency significantly.

Development within the Ripple network has been collectively fueled by their three innovative products: xRapid, xVia, and xCurrent. This consortium of networks makes up for what is referred to as the RippleNet.

Ripple recently launched Xpring in October 2019. This is positioned to improve network transmission and efficiency, making it easier for transactions to be verified on the Ripple blockchain.

EOS, a Chinese based blockchain project had one of the biggest ICO, raising about $4 billion in 2018. EOS is pioneering the era of the Delegated Proof Of Stake (DPoS) algorithm. Instead of a regular mining mechanism, the EOS architecture adopts a blockchain feature in which block producers oversee the creation of new blocks and in turn get rewarded.

EOS recently lost the position of the second biggest DApp platform to Tron. The EOS blockchain which adopts a very complex governance structure has had challenges growing its network in the past. One great problem that has trailed the NEO ecosystem is the scalability of the blockchain and most experts argue that the network is largely centralized.

The current development in the EOS ecosystem is the EOS Block.one Voice social network. The beta version of the network just went live on the 14th of February and is ready for testing. According to EOS, the state-of-the-art authentication login system integrated into the network will allow access only to real humans, eliminating the activities of bots.

The advantage of using this social network is the ability for end-users to earn/get paid via tokens as a reward for creating content on the platform.

Tron remains the most controversial blockchain project in history, despite all the criticism, Tron makes the top 15 blockchain projects by market capitalization. Tron recently overtook EOS as the second biggest DApp platform after Ethereum. The Tron Smart Contract platform is focused on decentralizing the internet.

Currently, the Tron platform is regarded as the best DApp platform for deploying gaming applications. Tron upcoming development is well planned for the future, according to the Tron roadmap, it is currently at the Odyssey phase of development. This phase will address the creation of economic incentives to create content and strengthen the network.

NEO was originally known as AntShares and was founded by Da Hongfei and Erik Zhan in 2014. AntShares later rebranded to NEO in June 2017.  NEO might not have made the top 10 crypto assets by market cap but it’s definitely among the top 20.

According to NEO, they are a unique blockchain project with a mission to transform the traditional financial system by combining digital and real assets. It’s unique ‘Superconduct Trading Mechanism’ allows users to trust funds through a decentralized platform.

As a project that has seen great support from the Chinese community, NEO is well positioned and has always featured in the Weiss cryptocurrency investment rating.

The most anticipated upgrade is the NEO 3.0, according to NEO technical director, “The new cross-chain technology developed by NEO can simplify the circulation and use of various digital currencies at NEO.”  This upgrade will increase the scalability of the NEO blockchain and ultimately increase the transaction capacity of the network up to 20,000 transactions per second(TPS).

As the cryptocurrency market gets more matured, blockchain projects are competing on who will lead the future of cryptocurrency and blockchain. The competition is a very healthy one as it breeds innovations across the blockchain industry.

Even though Bitcoin is the pioneering cryptocurrency, a lot more projects are rising to the occasion by solving the current challenges faced by the Bitcoin network.

Cardano which operates on a similar model like Ripple is positioned to solve some of the biggest issues facing cryptocurrencies around the world: interoperability and scalability. Cardano’s developers are specifically focused on tackling the international payments space, reducing the time and cost of international money transfers.