Home » Should I be HODL’ing? 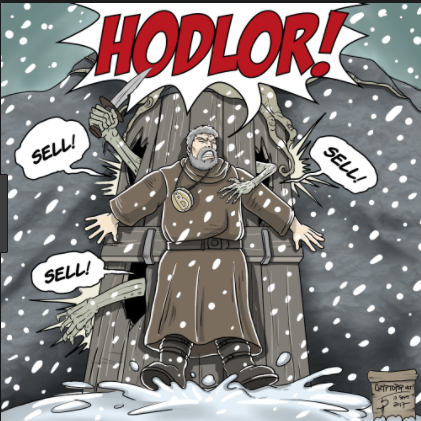 HODL; you are more than likely familiar with this word, and what it means to the blockchain and cryptocurrency communities. But did you know that if you bought a Bitcoin on the first day of 2018, and “HODL’d” it until today, December 13, 2018, then your investment is down about 75%?

For some investors, it makes sense to sell their investment if they have a hunch that the market is going to decline even further, yet, some members of the cryptocurrency community will ridicule you if you do anything except HODL your investments.

This raises the question, should you be HODL’ing?

What does it mean to HODL?

HODL’ing is a buy and hold strategy, and is a popular phrase thrown around in blockchain and cryptocurrency communities. The phrase originated on the BitcoinTalk forum in December 2013 when a user made a post saying that he is going to HODL– a typo for the word “hold”–his Bitcoin even though the BTC market was crashing at the time. The post went viral, and as the popularity of cryptocurrencies increased in late 2017, HODL turned out to be an extremely successful investment strategy.  During the rise of cryptocurrencies, the word HODL was used quite frequently, and newcomers in the blockchain and cryptocurrency communities welcomed the word into their lexicon with open arms.

In any financial market, although the time you enter the market can be crucial, what is far more important is the time you spend in that market. For example, if you bought Bitcoin in November 2013 at $1,000, you probably felt terrible watching the market steadily decline to a price of about $200 in January 2015–this represents about an 80% decline in your initial investment.

However, in 2018–even though the price of Bitcoin is down about 75% year-to-date–your initial investment from November 2013 would still be in the green and would have appreciated about 250%.

Although investors would probably prefer to invest at $200 per coin rather than $1,000, if they stuck out the volatile swings in the market, they would have profited in either case; this goes to show just how important the time you spend in the market is.

Why is it time over timing?

This time over timing idea is nothing new; the same holds true in traditional securities markets. Over time, businesses should be coming up with cutting-edge ways to improve, more efficient ways to do business, and inking new deals that allow production or service opportunities to expand and generate more profit. That being said, you can expect companies with a strong team and a strong product or service to increase in value over time simply because they will be doing more business, and their business will be more valuable as a result of the progress they have made.

The same goes for Bitcoin. Over time, the protocols at the foundation of the blockchain network should improve, useful applications (this part is crucial, the applications must be useful and solve a problem that exists. What they shouldn’t be is apps with a hair-brain token economy that do not make practical sense) will be built, and therefore, more consumers will use blockchain networks and Bitcoin as a result.

As you can see in the graph above, before the hype hit Bitcoin in late 2017, the value of Bitcoin was slowly but steadily, increasing. If the demand for Bitcoin continually increases, the price of Bitcoin will have to rise to compensate for the fixed supply.

That being said, the closer we get to 21 million Bitcoin in circulation, the more likely it is for Bitcoin to increase in value–that’s assuming the demand for Bitcoin continues to increase as well. This also assumes that the core devs, miners, and blockchain/cryptocurrency community continue to work on the code and support the network and other infrastructure around Bitcoin, and third parties continue to innovate over the Bitcoin blockchain in the form of sidechains and applications.

So should I be HODL’ing?

This concept is nothing new, take a look at the S&P 500, If you invested in an S&P 500 ETF on October 1st, 2007–we’ll use $SPY in our example– roughly a year before the stock market began to crash, you would be at a loss if you only held your investment for about 2 years.

However, if you invested before the market crashed and held onto that investment to this day–11 years later– your initial investment would have nearly doubled in value.

That being said, you can not go wrong with a HODL strategy. However, I believe the best investors have the ability to look at the market, can tell if what is happening is healthy and sustainable, or hyped up and over-valued, and then act accordingly.  Although the HODL strategy is sound, shorting an investment that you have reason to believe is going to decline is also sound.

If news came out that said there was a 100% chance that the price of an asset was going to decline from $100 to $2 over the period of one month, it would make the most sense to sell the asset and repurchase it at the lower value, or even better, take a short position on that asset, rather than HODL all the way through and tell investors who are selling their shares in order to purchase a larger stake for a lower price that they have weak hands.

Although you can’t go wrong with HODL’ing for long periods of time, always look at the fundamentals in the market and see if there is a better play that you can make with your money instead of merely weathering the volatile storm.